'Without European Court Russians will be unprotected'

The possibility that Russia will withdraw from the Council of Europe is increasing every day. The secretary-general of the Council, Thorbjorn Jagland, in a recent interview expressed his concern about Russia leaving, if the Russian delegates will keep being excluded from voting. Early next year new judges and other key officials will be elected. The conflict started in 2014 after the annexation of Crimea. Tanya Lokshina, the Russia program director of Human Rights Watch finds the situation ‘quite grim’, but still hopes that Russia wants to remain a member of this and other 'posh international clubs'. 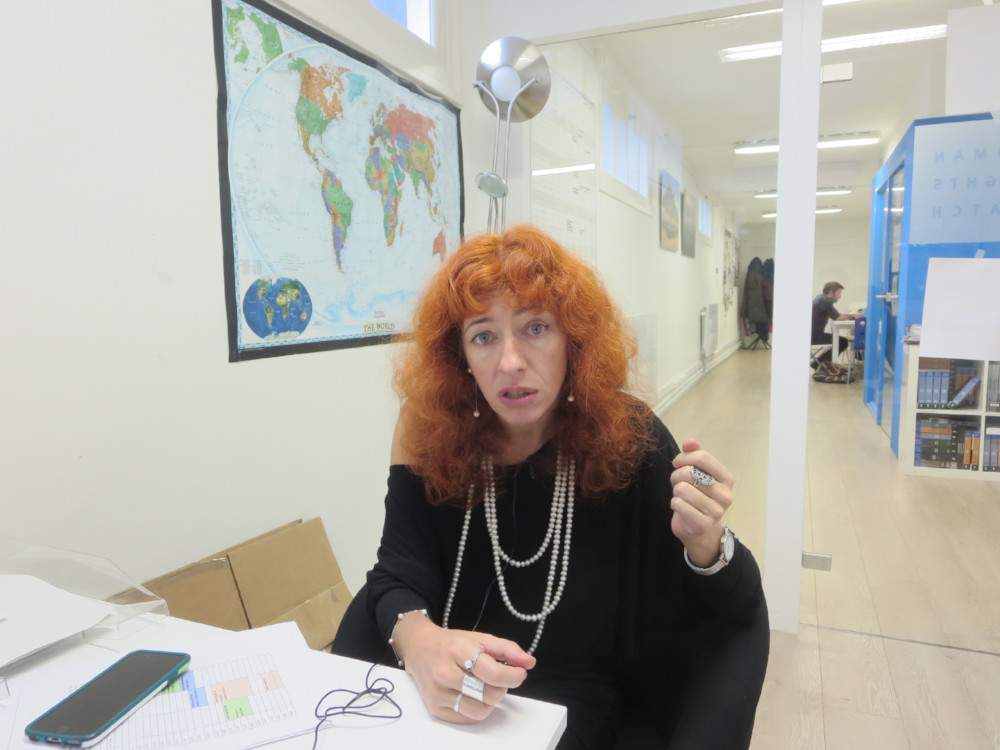 As a defender of human rights in Russia Tanya Lokshina passionately wants Russia to remain a member of the Council of Europe. Membership gives Russian citizens the possibility to seek justice at the highest Court in Europe, the European Court of Human Rights (ECHR) in Strasbourg. According to Lokshina ‘the court has been the most effective mechanism of human rights protection as far as Russia is concerned’. ‘It represents a huge hope for Russian nationals.’

Lokshina, on a short visit to Amsterdam for an event of Human Rights Watch, is one of the four staff members at the office in Moscow, which she joined in 2008. Asked whether the organisation is able to do its work in an increasingly hostile climate, she answers ironically: ‘Have you heard of the new normal? Well, that’s how we cope.’ Human Rights Watch has had an office in Moscow for 25 years now. ‘We plan to stay.’

The dispute between Russia and Strasbourg began in April 2014 when the Parliamentary Assembly of the Council of Europe revoked the voting rights of its 18 Russian members in reaction to the illegal annexation of Crimea. ‘At that time there was a general understanding,’ says Lokshina, ‘that once there was some tangible progress made, the issue would be reviewed and at some point the Russian delegation would return.'

'But not only has the delegation not been taking part in the work of the Assembly since 2014', she continues, 'the Russian government makes it fairly clear that it is not interested in returning, unless some major reform will be implemented. Russia wants to strip the Assembly of the powers to adopt country-resolutions. This, of course, would make the Assembly much weaker. If you look at the bigger picture and the way Russia is behaving itself at the Council of Europe these past few years, the situation is quite grim.’

The Council of Europe is governed by a Committee of Ministers (in fact by their permanent representatives) and by the Parliamentary Assemblee, which consists of national MP’s from all member states. The Assembly elects the judges of the European Court, can probe human rights violations and sanction a member state by exclusion or suspension.

In particular Lokshina refers to the legislation, adopted by Russia in December 2015, that enables the Constitutional Court in Moscow to overrule Strasbourg decisions. Many experts suppose that the law had to do with the outcome of the Yukos-case. The European Court had ordered Russia to pay almost 1.9 billion euros compensation to shareholders of the oil giant Yukos, which was seized by the Russian state. Russia’s Constitutional Court thereupon ruled that the Strasbourg decision violated the Russian constitution.

‘If the government deems it necessary, the Constitutional Court can technically speaking find ground to argue that a ruling is not in line with the constitution and therefore should not be implemented,’ says Lokshina. ‘That is basically what we see happening. Of course it tremendously undermines the power of the European Court.’

Russia is not the only country that doesn’t implement decisions of the European Court. British courts refuse to enforce a ruling on prisoner’s voting rights. That gives an excuse to other members to do the same, says Lokshina. ‘The very first case the Russian Constitutional Court ruled was similar to the British case. It had to do with prisoners and their voting rights.’

In July Russia suspended its contribution (33 million euros) to the (454 million euros) budget of the Council of Europe, stating it won’t make any payments until the rights of the Russian delegation ‘are fully restored’. Lokshina sees this as a serious sign that Russia might indeed at a certain point give up its membership. ‘Honestly, five years ago, if asked do you think Russia would leave the European Court and the Convention of Human Rights, I’d be saying it is really very unlikely. However, nowadays, it seems quite feasible for a country which has been isolating itself very significantly from Western democracies.’

At the same time she takes the statement that Russia cancels its contribution to the Council of Europa not as a fact, but as a bargaining chip. ‘The cancelation is what Russia said. It’s one of the issues being negotiated, because Russia’s contribution to the Council is very important.’  Moscow's recent announcement that it would increase the fund for financial compensation to citizens who saw their complaints recognized by the Strasbourg Court, strenghtens her in the opinion that Russia plays a 'fairly sophisticated game'.

‘By increasing the fund reserved for individual compensation based on Strasbourg rulings, the country is saying: we’re not giving up on the court, we’re very much in line with the European convention, we want to cooperate, we’re going to do our due and pay the compensations. All together Russia appears to create this bargain style situation, saying we are ready to continue negotiations, we are ready to cooperate, but if we are too displeased, if the situation becomes too stifling for us, we’ll quitt. That’s a fairly typical message from contempory Moscow to send to its international partners. We’re going to participate, but on our own conditions.’

If Russia, nevertheless, would leave the Council of Europe, it would be a terrible blow for Russian citizens, says Lokshina. ‘They would no longer be able to seek justice at the European Court of Human Rights, which has been the court of last resort for them for years and years. In many situations Russian nationals find the judicial system in Russia simply unsatisfactory. They are not able to find justice, they knock at all possible doors and still nothing is coming their way. In those cases they go to Strasbourg.’

Russian citizens make widely use of seeking justice in Strasbourg. Most applications are, however, not admitted. In 2016 7.010 complaints came from Russia, of which 645 were admitted. The court delivered 228 judgments concerning Russia, out of which 222 found a violation of the European Convention on Human Rights.In 2016 citizens from Ukraine, Turkey and Hungary filed more complaints then those from Russia. In number of judgments by the Court Russia leads the member states (23%), followed by Turkey (8,8%) and Romania (8,6%).

Many complaints from Russia concern ill treatment and torture in Chechnya. Notable recent cases: gay rights activists complained about the Russian legislation prohibiting the promotion of ‘non-traditional sexual relations’ among minors. The Court found the law  not clearly defined, discriminatory and encouraging homophobia and ordered Russia to pay damages to the complainants, varying from 8.000 to 20.000 euro’s. In another judgment the Court found the arrest of Russian opposition leader Alexey Navalny on seven occasions a ‘disproportionate reaction to peaceful political gatherings’ and ordered Russia to pay mr. Navalny almost 64.000 euro’s.

‘Many of the applications filed with the court by Russian citizens are about very mundane issues,’ tells Lokshina. ‘Such as getting rulings by domestic courts properly implemented, getting the bailiff service to work, spending too much time behind bars during the pre-trial investigation. Untill recently Russia always paid individual compensations.'

The rulings, however, also aim to remedy the bigger wrong, changing the system so as to bring it in line with the European Convention of Human Rights. When they concern ‘sensitive’ issues for Russia,  such as forced disappearances and torture in Chechnya that involve security and police officers, the measures ordered by the European Court aren’t implemented. None of the perpetrators in Chechnya has been brought to justice. But in less sensitive issues, Human Rights Watch has noticed a lot of progress.

‘The best example is a complaint by a prisoner about prison conditions in pretrial detention facilities: lack of air, lack of light, poor nutrition, overcrowded cells and what not. The prisoner did not complain of abuse by law enforcement or security officials. He filed it under torture, arguing that the prison conditions as such are torturous. The European Court accepted the argument and ruled in favour of the applicant. That gave a tremendous push to Russia’s penitentiary reform. As a result the cells in pretrial detention are no longer overcrowded, new facilities were built and so forth. That’s one of the many examples. It is not black and white. There are political sensitive rulings and others. The Russian government sometimes honestly wants to improve things. It is not all doom and gloom.’

Lokshina interviewed Russian citizens who filed a complaint at the European Court. Although they don't do it for the money, when they receive a compensation, they see this as a recognition that the government has done wrong. ‘That was very important for many people whom I interviewed. People see some progress in the system as well, where it concerns less political sensitive issues. The Court represents a huge hope for Russian nationals.’

Asked whether the European Court is known among the Russian population, her immediate reaction is ‘Oh yes!’ ‘The Council of Europe has given trainings to the legal community. Lawyers are fully aware that the court exists and an increasing number of lawyers is happy to file applications and do so in a professional and timely manner. The huge number of applications from Russia proofs that the mechanism is being widely used.’

According to Lokshina seeking justice in Strasbourg is not especially risky. It depends from the case. Whenever people seek justice in a sensitive case, they are threatened or pressured. ‘Whether you go to a domestic court or go up to Strasbourg, doesn’t really matter.’

It’s not up to her, Lokshina says, to give the European Council political advise as to how to restore the relations with Russia. But if countries want to sustain the European Convention, they themselves should not undermine the European Court.  'I’m not talking about Turkey or Azerbeidzjan, but countries recognized as Western democracies like the UK. Russia easily uses that example as an excuse. Secondly the issue of implementation of Strasbourg rulings has to be prioritized.’

Lokshina agrees that Russia still seems to find it important to remain part of the Convention. ‘Otherwise they would have left years ago,’ she says. ‘I think all the deliberations of the Kremlin not being interested in international prestige and not giving a damn about its reputation, are profoundly flawed, because there are clear signs that Russia is trying to restore its prestige and wants to be a  member of all those posh clubs. The problem is that Russia wants to be a member on its own conditions. It is up to the clubs to make it very clear to the Russian interlocutors that the rules are the same for all the members.'